It’s been a busy few months and I decided to take a break from any on-line presence .There was just too much negativity around this summer .

In May ,following the first relaxing of lockdown, we moved into our new home in the English Countryside in Herefordshire. This was followed by the sale of our barn where we’d lived for 22 years , and we finally moved everything out at the end of August.

I now have a new music room/studio in a Shepherds Hut in the garden , where I can get back to writing and developing my playing . 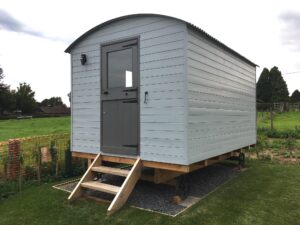 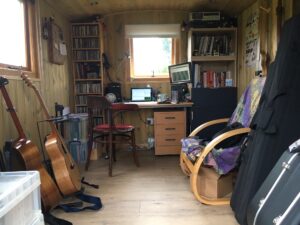 I’ve really missed playing live and it looks like it will be a long time before  we’ll be back to any sort of normality in live music venues. Somehow playing to a video camera/phone with no audience doesn’t give the same buzz.

As we (hopefully) avoid going back into Lockdown again, I’ve decided to make available the 3 tracks I recorded during the original lockdown in early Summer.

All three tracks were a bit of an experiment with recording techniques and styles and I was joined ( safely socially distanced by more than 2000 miles) by Ted Fordney on bass and backing vocals and general useful suggestions.

This is a jangly pop song , written back in February and demo’d very differently at that time . Tried to get a 60’s psychedelic pop feel.

An alternative take on the title track to the new album. A chance for me to experiment with the Lap Steel guitar and try to achieve an intentionally country folk feel .

Another brand new track demo’d acoustically in January. This is intended as a sort of chilled, percussion driven mix for a song about post Christmas blues.

These songs are very much early versions and over time and playing live may well develop and change but the recordings at least capture a period in time.

The new album Wildflowers  is about to go live on streaming services and on my Bandcamp site . Will Post all the launch details next week  . Watch this space

8 Replies to “Breaking The Silence and Lockdown recordings”